Our recent study has demonstrated that psychological resilience can be developed in the middle of the Covid-19 pandemics. In April 2020, in the midst of lockdown, Positran, a boutique consultancy specialising in applied positive psychology, tried to support professionals through the challenging times via a free SPARK Resilience programme delivered over 8 webinars. The data collected before and after their participation demonstrated strong impact of the programme on their resilience, meaning, stress resistance, positive and negative emotions and even work engagement, in comparison with a waiting list control group. 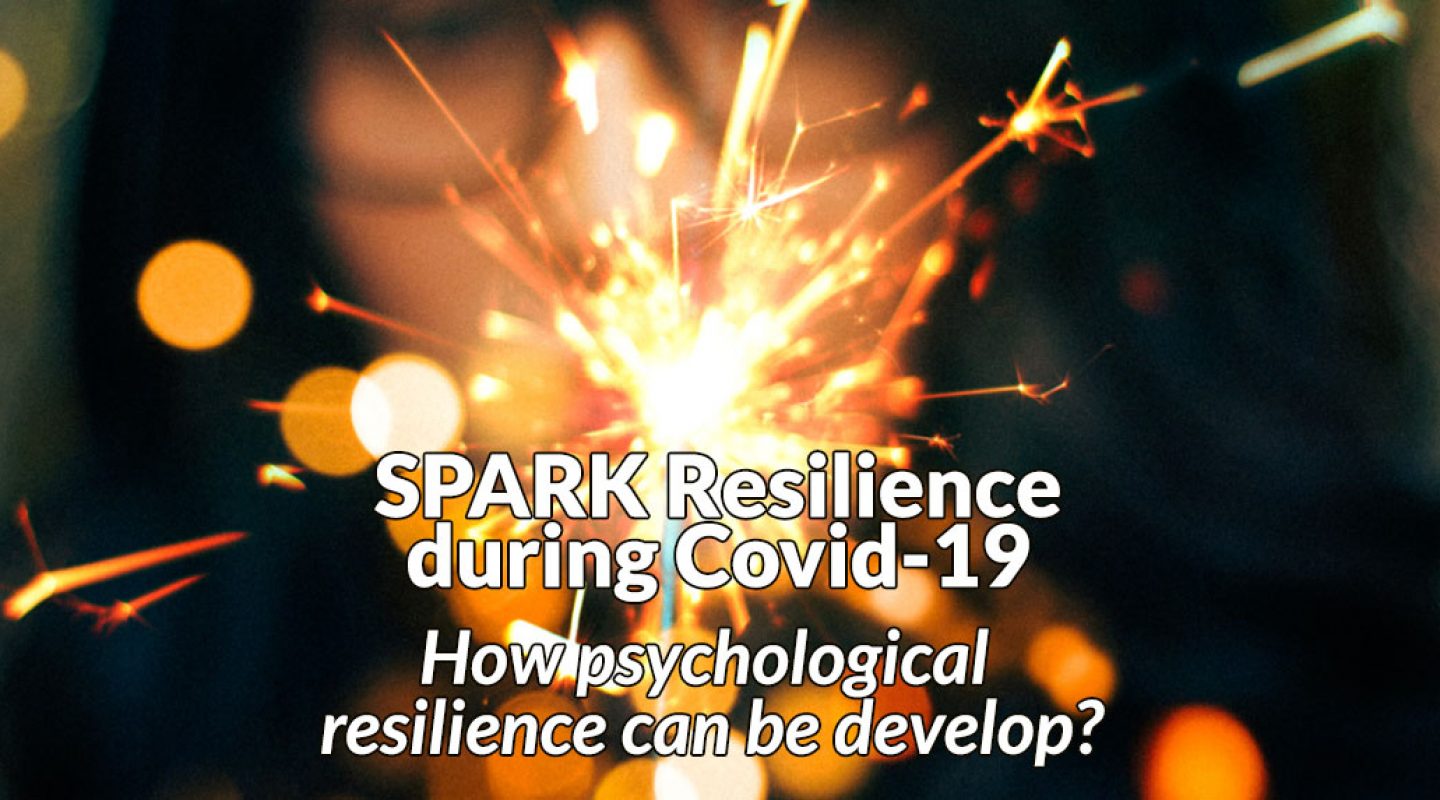 The Mental Health Impact of Covid-19

Evidence shows that our mental health has taken a toll during the Covid-19 lockdown. Whilst most of the French perceived it quite positively during the very first stage, a few weeks after 30% of the population started having trouble sleeping, 40% experienced distress and many developed anxiety for the future.

This is hardly surprising – some of us have lost loved ones during the pandemic, others were separated from their family, many fear for their health, and even life, because of their age and underlying physical issues. Some have had to combine remote working with full time childcare, others found themselves permanently “on” without the break which is often provided by a physical separation between the workplace and home, whilst others were on “standby” wondering if their jobs were even going to exist post lockdown. Many are now emerging from lockdown facing the realisation that their employment is indeed over or their businesses have collapsed.

Whilst many researchers focused on the psychological experience associated with the lockdown, Positran has investigated how we can develop resilience and other psychological resources during this extraordinary period. Resilience can be considered as one’s capacity to be in control during difficult times and to bounce back from challenges and adversities. Whilst some aspects of resilience are innate, scientific evidence shows that resilience resources can also be developed. The question is « how » ?

Originally developed in 2009 in England and used since across the UK, France, Netherlands, Japan and Singapore, the programme SPARK Resilience had already shown positive impact on resilience, self-esteem and depression outcomes in previous research trials (Boniwell & Ryan, 2009; Pluess & Boniwell, 2015; Pluess, Boniwell, Hefferon, & Tunariu, 2017). Recently updated, the SPARK Resilience Programme includes all the latest evidence-based cognitive, affective and behavioural strategies for resilience enhancement, as well as meaning discovery exercises. Positran has adapted the programme for use during the Covid-19 pandemic, and offered free participation in the French version of the programme to adult volunteers. Within two hours after the first communication on social media, hundreds of people had applied, and over 230 people took part in the first delivery of the programme, participating in all or the majority of the sessions.

The programme was delivered on-line via video conferencing over eight 1.5 hours sessions and included a combination of teaching, whole group interactions and small virtual group discussions.  The programme was comprised of over twenty practical tools and techniques, regular guided mindfulness exercises and non-obligatory homework. The teaching was carried out by Professor Ilona Boniwell and Justine Chabanne, a registered work psychologist.

and Larissa Kalisch (psychologist and researcher, Positran, France) have measured the impact of the programme on the programme participants in comparison with the waiting list control group (people who did not participate in the intervention at the same time but were offered participation at a later stage).

Both groups completed a series of questionnaires on perceived stress, negative emotions, positive emotions, resilience, meaning and work engagement before and after the SPARK Resilience Programme. After the data cleaning, we had 84 participants in the intervention and 96 participants in the control group. The preliminary results show significant and fairly strong effects on all variables (see the graphs below).

This means that people who have participated in the programme had their resilience, positive emotions, meaning and work engagement grow, whilst these resources declined in the research volunteers who did not follow the interventions.

In addition to this, the participants’ stress perception decreased following the SPARK Resilience Programme, whilst it stayed stable for the control group. Finally, although the negative emotions decreased in both groups (possibly as a result of getting used to the situation), they went down much further in those who participated in the programme. 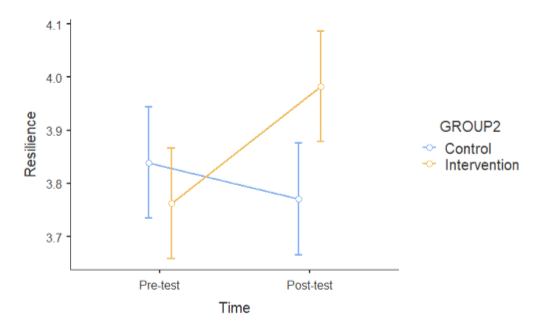 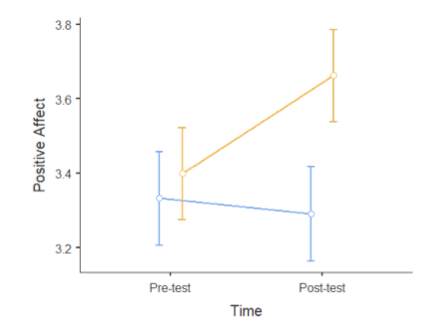 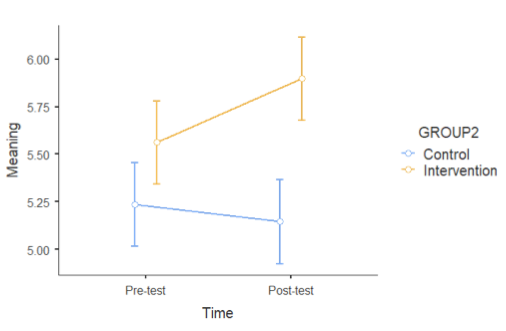 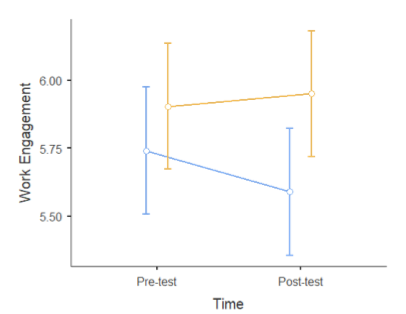 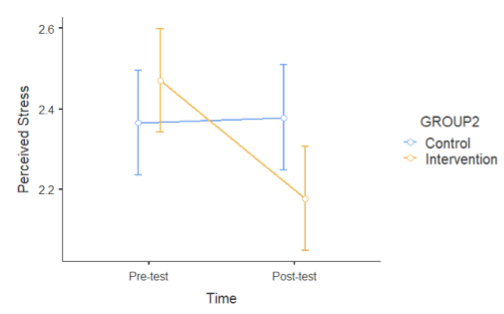 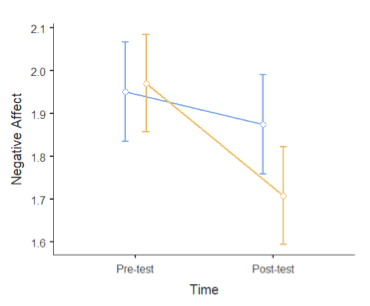 As many of us are starting to reengage with life, we are realising that the “new normal” is not quite the same as the life we used to know. Mental health consequences are likely to persist for the months to come. Economic consequences may last even longer. Rebuilding the societal functioning and the economy will require psychological resources and resilience from all of us. We may need to accompany those who have become apprehensive of getting out and about. Workplaces will need to support vulnerable employees, whilst asking for more energy, resilience and engagement from others.

Thanks to the research from the SPARK Resilience Programme, we now know that resilience, stress resistance, positivity, meaning and engagement can be developed in a way that is easy to implement, inexpensive and effective.