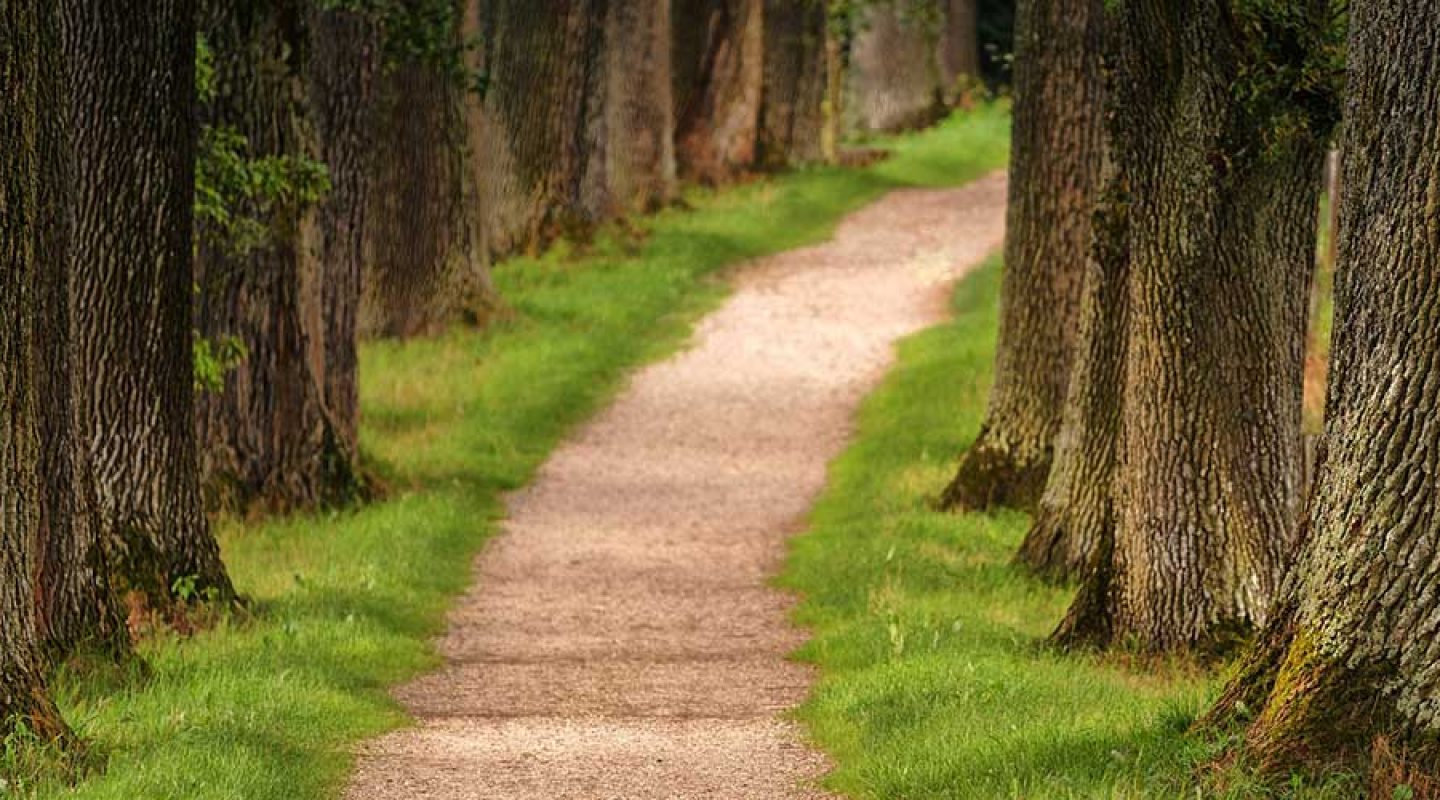 Imagine you were sitting on a gentle hill overlooking an unspoiled river bed surrounded by groups of old, knobby, and luscious trees, small animals resting in the shade, a gentle breeze, bird’s twittering, the smell of healthy, vibrant soil. How does that make you feel? Relaxed? At ease? Excited? Afraid? Refreshed? Indifferent? Would this be a place where you could imagine to stay for a while?

When given a choice people usually prefer this kind of environments (particularly those with water features, large old trees, intact vegetation or minimal human influence) to urban ones, regardless of nationality or culture . Moreover, the majority of places that people consider favourite or restorative are natural places. And the more people are mentally fatigued, the more they are likely to choose a restorative walk in a natural rather than in an urban environment. The question is, why then do we spend most of our time in urban and/or indoor environments where most of these features are replaced by concrete, noise, and pollution? Well, more and more people all over the world are asking themselves exactly this question and consequently spend more time in nature, learn about nature, start growing their own food, and engage in ecosystem restoration projects and community gardens and farms.

And rightly so. The benefits of physical and psychological connection to nature on all sorts of human well-being have been well documented. And looking into our past this is not surprising. As Pretty (2002) estimated, for 350,000 generations humans have lived close to the land as hunter-gatherers, where they were characterized by a sense of belonging, place, and feeling embedded within the broader natural world. In contrast, we are predominantly urbanized and dependent on industrialized agriculture for just two generation. And yet, despite this recent psychological and physical disconnection we are strongly wired in these old patterns. And it would be surprising, if our modern life divorced from nature did not have some negative consequences associated with it. The fact that in those two generations, we have destroyed much of our ecological basis, polluted our rivers, air, and landscapes and concreted much of the rest, gives food for thought. Correspondingly, we should expect immense benefits, if we reconnect and restore our environment. Taken together, it seems that we should be more than interested in integrating more nature into our lives and work environments.

While we introduced the concepts of nature connectedness and meaningful nature experiences in our first article, this article covers in more detail the positive outcomes of interacting with nature, as well as how to become open for them. In order to avoid ambiguity and to stay pragmatic we consider nature as all living and nonliving components of ecosystems, excluding nonliving human-built environments, natural disasters, and fear arousing animals.

What happens when we interact with nature?

Russell and colleagues (2013) have compiled the literature on impacts of nature interaction on cognitive function and well-being. They thereby covered four channels of interaction and ten dimension of human well-being. The four channels are knowing, perceiving, interacting, and living within nature. The ten dimensions of human well-being are physical health, mental health, spirituality, sense of control and security, capability, inspiration, sense of place, identity, connectedness and belonging, as well as subjective overall well-being.

Not every one indicator of well-being is influenced by all channels, nor does every one channel influence all indicators. Different effects can exist independently, but parallel. Sometimes negative emotions can be evoked, such as worry when someone becomes aware of the degree of ecological destruction. However, they can often be balanced out by other indicators of well-being or abilities, which can furthermore lead to increased self-empowerment and self-esteem. The range of effects presented here is extensive, but not exhaustive.

Knowing and learning about our interconnectedness with nature has been associated with a large number of positive long-term outcomes, such as personal growth, awe, better long-term decision making, purpose, ability for intimacy and community and decreased extrinsic aspirations such as money, image, or fame, which have been associated with ill-being. Having nature in close proximity or just knowing it exists is important to people regardless of whether they are regular users of it.

Perceiving nature, that is the remote interaction with ecosystem components, leads to a number of benefits. Studies of the workplace, for example, found that a view of natural elements lowered employees’ stress and intentions to quit, while it increased employees’ general well-being, satisfaction with work, general life satisfaction, patience and lead furthermore to faster restoration after concentration, illness, and injury. Further positive associations have been found with inspiration, health, self-discipline, and attention.

Interaction is the physical, active, direct multisensory interaction with ecosystem components and has been associated with a number of remarkable benefits. When recovering from a crisis, for example, the effects of experiencing and interacting with nature have been found to be even stronger than taking a walk or speaking to friends. Non-consumptive interactions (that is non-motorized, no hunting or fishing) with nature were found to be connected to generosity and caring. Pet ownership and contact with animals is associated with longevity and positive emotions. But the list goes on.  Spirituality, self-confidence, sense of belonging, clarity about “what really matters”, increased sense of control, improvement of higher level cognitive skills, vitality, personal growth, creativity, pro-environmental behaviours, strong feelings of connectedness, as well as more beneficial social networks are all powerful indicators of well-being that have been associated with interactive, non-consumptive engagement in nature.

This covers the everyday interactions with the ecosystem one lives in over a prolonged period of time. Evidence of bidirectional links between ecosystems and human health has inspired calls for healthcare systems to address nature as a way of nurturing human health. Living surrounded by nature is linked to mental health, a more positive outlook on life, more resilience to psychological distress, and decreased stress in general. Moreover, long term effects likely include and amplify those mentioned under perceiving and interacting with nature. Recent research shows further that increased biodiversity around where people live correlates positively with human microbiotic diversity and that it may contribute to greater immunological tolerances. And going even further, the health of the internal microbiota has been linked to mental health, such as decreased levels of depression and anxiety.

The proximity of buildings to nearby vegetation has been shown to reduce levels of fear, crime, aggression, and violence among the inhabitants, however no final remarks can be made in this regard, as the findings are not entirely clear yet. Living consciously in natural environments most likely ameliorates connections between people as well as between people and nonhuman animals, which has been found to increase human well-being.

What can we do?

A major step is to become open to and conscious about the fact that we can make choices towards what is really beneficial for us. While all four channels of interacting with nature have benefits, going for all four channels is likely to lead to the most beneficial results as they likely amplify each other.

Learn and observe. Become ecologically literate. Learn about your interconnectedness with the natural world, read about permaculture, inform yourself about the water, nitrogen, and carbon cycles. Explore the effects of working with nature rather than against it.

Increase vegetation around you. Start small, maybe from your desktop and your office, collaborate with colleagues and neighbours, maybe even start to regreen your quarter. If you don’t have the possibility to do so right now, you might be happy to know that positive effects on well-being have already been found when we actively imagine ourselves to be immersed by unspoiled nature.

Spend your weekends in nature, attend a survival course, go and be present in a nearby forest, be present when you interact with an animal, start growing your food, go camping, or spend some time at an ecosystem restoration camp. Try to grow mushrooms, make kombucha, a sourdough bread, or sauerkraut – it’s easier than you think! Go and encounter the natural world as it is and become open for your first meaningful nature experience.

Become aware of nature around you. What is already there? What can be increased? Could you maybe work remotely some days, for example, by freelancing closer to nature? Can you motivate local politicians to regreen your neighbourhood? Are there already any community farms nearby? Does your company already offer participatory company gardens? Get together with friends and find out what you can do (together). Why not put roof top gardens on unused roof tops? Also, don’t be shy concerning the amount of plants you put into your office!

It is our un-reflected collective beliefs that have disconnected us from nature, that have made us leave our habitat and brought us our ecological and social crisis. But what if they are but one culturally learned possibility? And what awaits us from transcending it? And indeed, if you really think about it, it makes a lot of sense. What if many of the troubles we see these days, and which we too often locate in the (negative) nature of humans might actually be due to our divorce from our true habitat? What if we flourish in nature simply because this is where we belong?